Dashcams are designed to record your drive, but did you know BlackVue dashboard cameras can also monitor your car when you are away? It is a very useful feature to have if you are worried about hit-and-runs or vandalism on your parked vehicle. All BlackVue dashcams feature Parking Mode monitoring. Here we share a few things to know about Parking Mode.

When does the dashcam switch to Parking Mode?

BlackVue Parking Mode activates after the dashcam’s accelerometer detects that the vehicle is stationary for five minutes.

With the X Series models, you can hardwire the dashcam directly to the fuse box of your vehicle. In this case, the dashcam will switch to Parking Mode as soon as ignition is turned off and monitor the voltage to shut down at the set cutoff value.

X Series models also activate Parking Mode based on the accelerometer’s status, in case you cannot hardwire the dashcam but still want to use Parking Mode.

Learn more about these two modes.

Unless mentioned otherwise, the instructions on this page refer to Motion & Impact Detection Parking Mode. 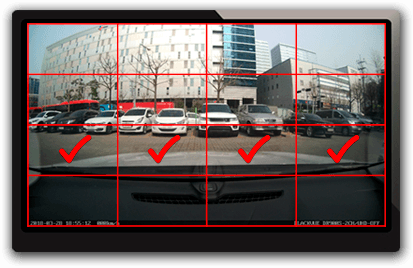 With the DR900X/S and DR750X/S Series dashcams, users have the added possibility to choose detection regions to reduce the risk of triggering too many motion recordings due to trees swaying in the wind, far away moving objects, etc. 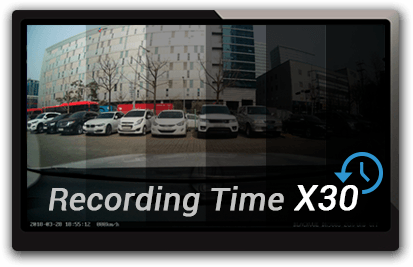 Time Lapse Parking Mode allows your dashcam to continuously record at 1FPS (one frame per second). Videos are played back at 30FPS.

This mode allows to cover a period of more than 27 hours on a 16GB microSD card for a dual-channel model at the highest (Extreme) quality setting.

Additionally, when impacts are detected, the dashcam creates a buffered Event video.

How does the dashcam record in Parking Mode?

In Parking Mode, your BlackVue is active all the time but does not write to the memory card, unless: *The BlackVue constantly keeps the last few seconds of video in its buffer memory so as to catch the actions that led to the trigger.

What are the advantages of Parking Mode over Normal Mode?

In Parking Mode, because it only records when something happens, your BlackVue minimizes the risks of overwriting important footage during long Parking Mode sessions.
It also reduces the stress on the microSD card, which helps extend the memory card’s lifespan.
Additionally, the GPS module is turned off during Parking Mode, which reduces power consumption.

I have a dual-channel dashcam. Does Parking Mode work for both cameras?

The Parking videos can be triggered by motion detected by either the front or the rear (or interior) camera.
The Event videos are triggered by vibrations detected by the accelerometer located in the front camera.
In Time Lapse mode, all cameras record continuously.
In either case, the dashcam will save videos recorded by both the front and rear cameras.

Can I deactivate Parking Mode?

Yes, Parking Mode can be deactivated in your camera’s settings.
In this case, the dashcam will continue recording in Normal Mode as long as it is powered, even if the vehicle is stationary for more than five minutes.

What do I need to use Parking Mode?

All current BlackVue dashcams models (except DR750X-2CH LTE Plus) feature built-in voltage monitoring. These models come with both a cigarette lighter power adapter and a hardwiring cable. 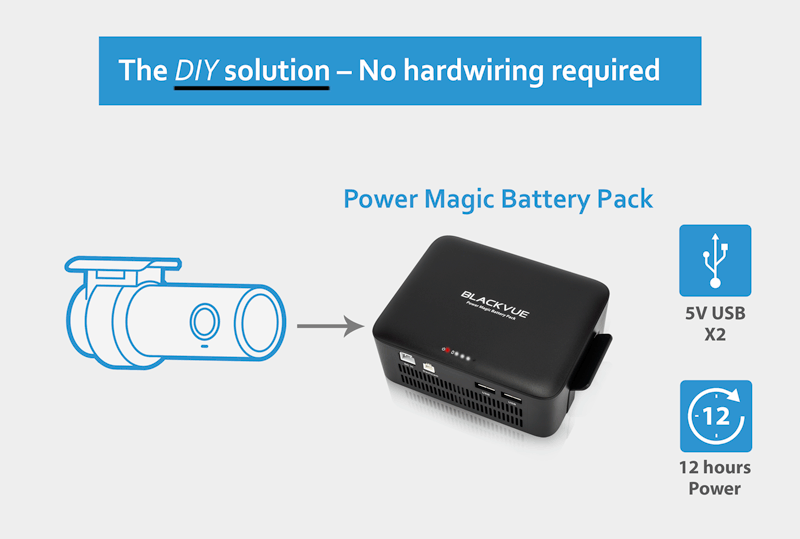 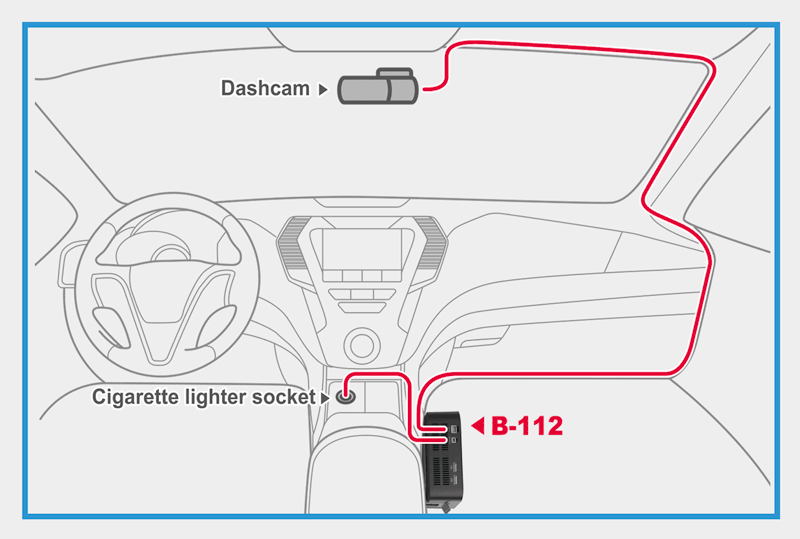 The Power Magic Battery Pack simply plugs into your vehicle’s cigar lighter socket and provides a female power socket to power your dashcam.

While ignition is ON, the Power Magic Battery Pack charges itself while powering your BlackVue. It charges itself fully in approximately one hour.
When ignition is OFF, the Power Magic Battery Pack keeps your BlackVue powered for up to eight (8) hours—for a dual-channel dashcam—or twelve (12) hours—for a single-channel dashcam.

Designed with safety in mind

Unlike conventional lithium-ion battery packs found in consumer electronics like phones or laptop computers, the Power Magic Battery Pack is of the LiFePO4 (lithium iron phosphate) type. LiFePO4 batteries are highly resistant to heat, which is critical to ensure safe operation in a vehicle. Indeed, in a vehicle parked in the sun, temperatures can reach levels at which lithium-ion batteries could pose a safety hazard. Note that this is also why our dashcams use a supercapacitor instead of a battery. Last, LiFePO4 batteries have an overall higher lifespan (based on number of charge/discharge cycles) when compared to lithium-ion batteries.

The Power Magic Battery Pack is small enough to fit in a glove box.

Power for your other electronic devices

Two USB ports let you charge other electronic devices such as phone, tablet or a Wi-Fi hotspot to enjoy BlackVue Cloud. 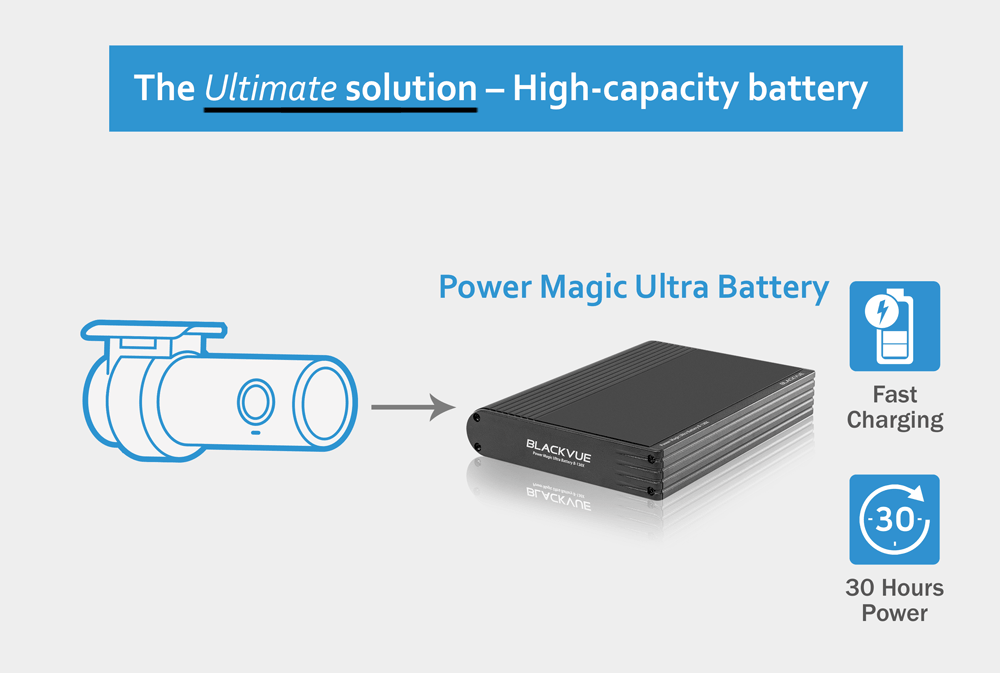 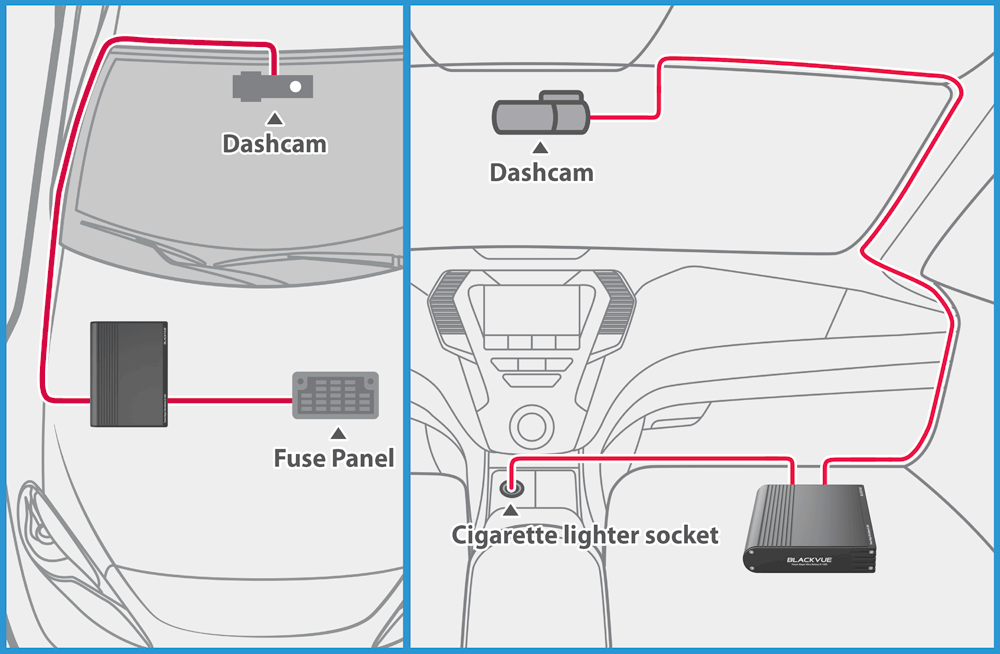 The Power Magic Ultra Battery can be plugged into your vehicle’s cigarette lighter socket or hardwired via the vehicle’s fuse panel.

The status of the Ultra Battery can be checked via the BlackVue App or the BlackVue Battery app (iOS/Android). Both let you see at a glance available capacity, time to full charge (when charging), expected time available (when powering the dashcam) and change settings. 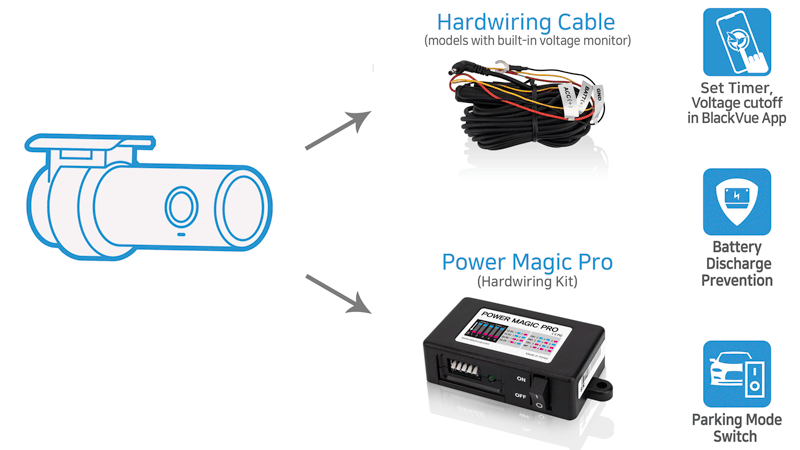 Note: as of January 2023, the Power Magic Pro is discontinued.

If you are not afraid to work with the fuse panel or if you are having your camera professionally installed, this can offer a stealthy installation option with minimal footprint. However, note that while the upfront cost is lower than investing in a dedicated Parking Mode battery, your vehicle’s battery will be subject to higher stress, which may affect its lifespan.

Hardwiring kits allow you to:

Monitor your car from anywhere, anytime

When your dashcam is connected to the Cloud, you can be alerted instantly of anything that happens in Parking Mode. 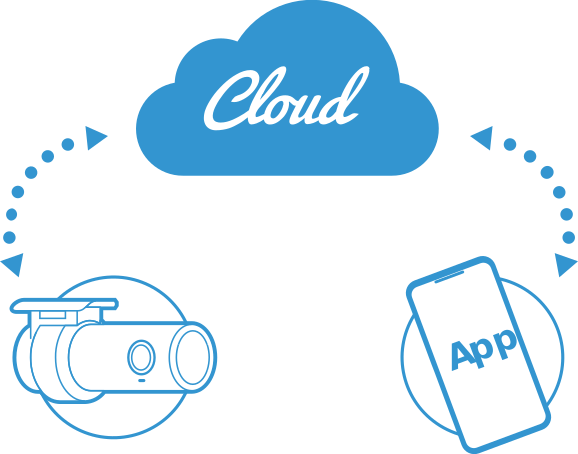 In the video below, you can see a van trying to park and bumping into the BlackVue owner’s car in the process. The bump was detected by the dashcam’s accelerometer. Since the dashcam was connected to the Cloud, it sent a Push Notification to the owner’s phone, who happened to be at his workplace nearby. He was then able to run out and catch the driver who was seemingly trying to drive away. After the driver feigned not knowing he had hit the car, our dashcam owner downloaded and showed him the video footage. The van driver had nothing more to say. Video credits: Jerry Z