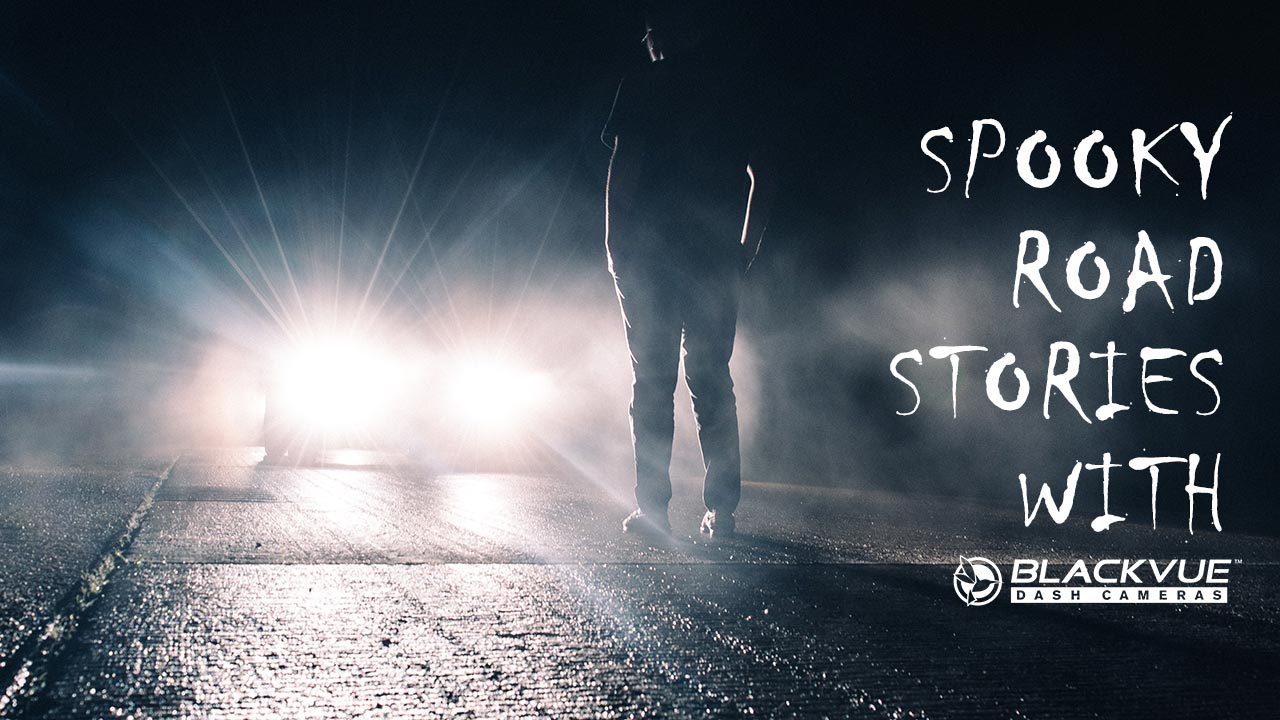 How was your Halloween this year?

Here at BlackVue we were busy getting spooked!

Last Friday we asked you via our newsletter to send us horror stories that happened to you on the road. And you did not disappoint!

Originally we planned to feature only 11 stories – one grand prize winner and 10 runner-up stories. However, the response to the event was overwhelming – we had to feature more, and here are some of the winners of the first BlackVue Halloween giveaway event!

The girl on the freeway

Last Halloween Judy and her husband were out with their friends. They decided to call it a night around 2AM and got into the car to drop off their friends.

There was no one on the freeway… until they saw a car on the side of the road, in a ditch, headlights on, all airbags deployed, the car alarm going off.

Judy called 911 and they stopped to see if there was anything they could do to help.

Judy told us, “We all got out of the car but didn’t see anyone. We thought that it must have been a drunk driver and they must have taken off, scared to get in trouble. As we headed back to our car, a girl covered in blood ran from behind the freeways’ sidewall, screaming and running towards us. She screamed that we all need to get out of here and we have to take her with us!

We were trying to calm her down, we assumed she was in shock, we told her we would help and that help was on the way. She began to get really aggressive, started running all over the freeway screaming…”

Understandably, everyone got really scared and decided to wait for the police in their car. As all the doors closed and locked behind them, the girl suddenly appeared, trying to open the doors, banging on the windows, screaming to let her in.

“At this point we told the 911 dispatcher that our lives were in danger and decided to drive away. As we took off, she ran towards our car for about half a mile before giving up!” Judy continued.

“This was so scary!  I will never forget the look on her face, or ever forget this experience. If I had this dash cam this video definitely would have been one for the books!”

This story definitely gave us the chills! Judy is the grand prize winner and she will receive the BlackVue DR900X-2CH dashcam – to capture any future moments like this. Of course we hope nothing of the sort happens again, but… who knows…

Sometimes we get a “feeling” that something is not right. We can’t explain it, but we can sense it.

This happened to BlackVue user Wee, who traveled on a road with 100km/h (62mp/h) speed limit. On that particular day, for no apparent reason, he decided to drive around 70km/h (around 43mph), well under the speed limit.

It was a dark night and he didn’t have his high beams on due to the oncoming traffic. So a deer appearing suddenly in front of his car was a total surprise!

If he was driving faster, he wouldn’t have been able to stop in time. How did he know he had to slow down that night, even though he traveled that road thousands of times?

Sometimes though, it’s not simply a feeling. It’s a sign from someone watching over us. Here is Kiley’s story:

“I was driving home from work at a bar one night listening to the late night party radio music. I was heading down this dark road when all of a sudden my passenger seatbelt alarm started to go off. I pulled over, clipped and unclipped the seatbelt, I smacked the seat to make sure it wasn’t just stuck. I couldn’t make it stop. It was 2am so I thought I would just ignore it and go home. I began driving again and out of nowhere this really strange car whizzed by with no lights on. The seat belt alarm was still going. To this day I feel like someone was sitting there trying to warn me about this car. I was 15 minutes away from my house when it stopped. It never happened again.”

Fans of one particular horror genre – gore – may enjoy this story sent to us by Collin.

Back in 2005, Collin was a young field technician and he was driving to do some repairs for the last client of the day.

Halfway through though, it started to get very dark, cold and foggy.

Collin said, “Then the torrential rain kicked in with small bits of pelting hail and BAM! I see small bits of meat with blood all over my windscreen. This FREAKED ME OUT so I slowed to see what had happened. Turns out, the truck in front of me had hit a kangaroo and it went under  the truck…”

Meanwhile Tommy, a BlackVue user, sent us footage of an encounter with a majestic, but frighteningly huge creature – a moose!

Not all stories sent to us by you were gravely (pun intended) serious.

One BlackVue user told us that thanks to BlackVue dashcams (which on top of recording video also capture the audio!) he learned that his wife thinks he is just like their little dog, Jorik! What a terrible, horrible discovery.

Another story involved a spooky misunderstanding. A.J. was waiting for his wife in his car at a busy shopping center. As his wife got back into the car, he started driving off before realizing… it wasn’t his wife sitting next to him! It was another woman he had never seen before, who furthermore looked as bewildered as he was. As it turned out, the strange woman’s husband was parked just behind A.J.’s car, also waiting for his wife… and both vehicles were white! The husband, who had witnessed the whole scene, was reportedly laughing his head off. A silly yet heart-stopping mistake.

This is only a small number of the spooky stories we received from you!

We will be sharing more of the winners’ stories on our Instagram soon, so don’t miss it and follow us there today!

If you are not subscribed to our newsletter and you’d like to receive recent BlackVue related news, information about our products and events like this one, please subscribe here.