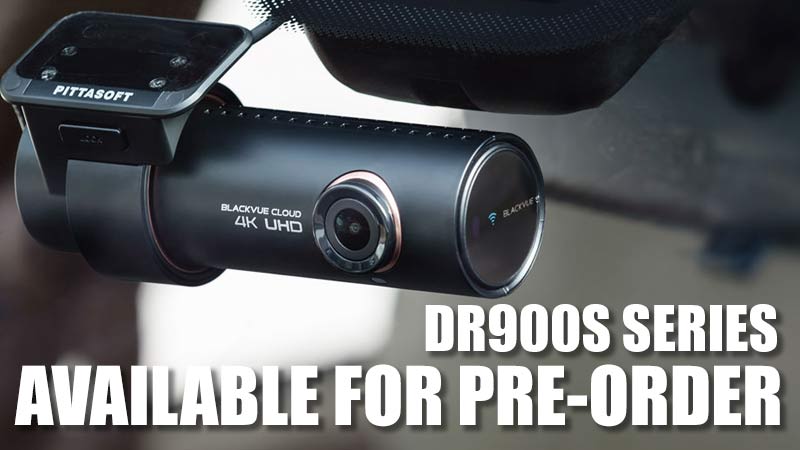 Seoul – April 13, 2018 – BlackVue is delighted to announce the availability for pre-order on www.blackvue.com of its highly anticipated 4K UHD dash​cam, the DR900S Series, in single-channel and dual-channel —front 4K UHD, rear Full HD—versions. Along with 4K recording, the new models feature HEVC compression, dual-band 2.4-5GHz Wi-Fi and BlackVue Cloud connectivity, making it the ultimate car camera for protection when driving or parked.

Dashboard cameras are only as useful as the videos they can deliver. If the ability to capture fine details is any indication of a dash​cam’s appeal, the DR900S Series is guaranteed to be a crowd-pleaser. The 4K Ultra High Definition resolution contains exactly four times as many pixels as Full HD. For a dashboard camera, this can mean the difference between an unusable pixelated blur and a readable license plate. To take even greater advantage of the extra resolution, the DR900S Series packs an ultra-wide 162-degree lens. Although 4K resolution usually comes at the cost of low-light clarity, the large pixel size of the 8-megapixel sensor of the DR900S Series allows it to perform exceptionally well at night and in dark environments, while maintaining a low level of noise. In daylight, the ability to “freeze” the action is nothing short of spectacular, thanks to a high shutter speed, so users can clearly see the details of vehicles even in adjacent lanes at the edges of the screen.

While the 4K UHD resolution is an impressive feature in a dash​cam, 4K content generally requires a lot more storage space than Full HD videos. For a dash​cam, this could be a deal-breaker. Fortunately, the DR900S Series incorporates the best in video compression technology: HEVC (High Efficiency Video Coding), also referred to as H.265, is the leading standard in broadcasting and streaming of 4K video content. This major advance allows the DR900S Series to store as much 4K footage as a Full HD dash​cam would with the more common H.264 standard. Although H.265 is the default setting, users can still opt for H.264.

As one of the first brands to incorporate Wi-Fi into dash​cams years ago, BlackVue innovates once more with the inclusion of an 802.11n 2.4GHz / 802.11ac 5GHz dual-band Wi-Fi module. For smartphones and tablets supporting the 802.11ac 5GHz Wi-Fi standard, transfer speed can be up to three times faster than with 2.4GHz. But there is more: BlackVue also developed a new feature called Sub-Stream, which saves small-sized versions of the videos in parallel to the full-sized ones. The sub-streams can be downloaded in record time or used for quick preview when browsing the dash​cam’s videos with the BlackVue App. These enhancements benefit the user experience both when connecting to the dash​cam via direct Wi-Fi or over the Cloud.

“The BlackVue DR900S Series is clearly the most anticipated dash​cam we have had in years” said Jeremie Sinic, head of Marketing for BlackVue. “4K changes everything, and people know this, judging by the growing excitement generated since our initial announcement last year at the SEMA Show. However, making 4K work well in a dash​cam is another story. Thankfully, improvements in key areas like video compression and connectivity make the DR900S a joy to use.”

The BlackVue DR900S-2CH and DR900S-1CH models are now available for pre-order on www.blackvue.com.

ABOUT BLACKVUE™:
Established in 2007, BlackVue has become the standard for simple, reliable, connected and elegant dash​cam design. It introduced Full HD dash​cams globally, followed by Wi-Fi connectivity for easy setup and management of videos through a mobile phone. It also became popular for its advanced Parking Mode monitoring function.

Since 2015, BlackVue has set itself further apart with the launch of Over the Cloud, a service enabling remote Live View of in-car footage from anywhere, anytime with the BlackVue app. This unique feature provides both business fleet managers and individual users with new ways to easily monitor their vehicles in real time, from the palm of their hand.