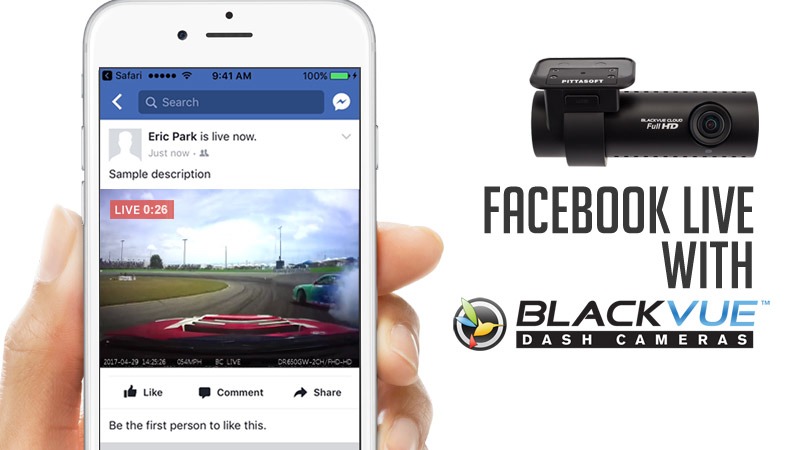 Seoul, Korea – May 4, 2017 – BlackVue, the Korea-based dashboard camera manufacturer, just added Facebook Live streaming to its range of Cloud-connected dashcams, through an update to its BlackVue App for iOS and Android. The new feature was field-tested during a drift racing event in Orlando in late April.

“We realized that some users want to do more with their dashcam than just protect their car, and we simply thought ‘Why not give them the tools to enjoy their passion?’”, said Jeremie Sinic, Marketing Manager at BlackVue. “Some car enthusiasts like to share their ride with their friends or followers on social media, but doing so with a mobile phone while driving can be dangerous. With Facebook Live streaming through the BlackVue App, you can share your ride while keeping your hands on the wheel”. The feature is a free addition to the range of Cloud services offered by BlackVue for its Cloud-compatible dashcams.

BlackVue dash cameras are first and foremost car security products. They are always recording, providing video proof to help determine liability and facilitate insurance claims in case of an accident or other unexpected event. However, that did not stop owners from putting their dashcams to different uses, from content creation to entertainment. Through its sponsorship program, the company has been building in the past year a community of tech-savvy ambassadors—totaling more than two million followers—who love their car and often share their BlackVue footage on social media. BlackVue is also sponsoring Formula Drift as well as professional driver Ken Gushi and his team GReddy Racing. The addition of Facebook Live streaming is a way to give those users the ability to stream safely to the social media site from their dashcam.

Although Facebook Live streaming is only one of many services enabled by the company’s BlackVue Cloud platform—ranging from Remote Live View and backup to impact alert Push Notifications for parked vehicles—the first field test of the new feature during the Formula Drift Orlando event on April 29 was the occasion to explore a new world of possibilities for BlackVue’s connected dashcams.
Since 2016, BlackVue is the presenting sponsor of the Formula Drift Pro Championship, an eight-round racing competition throughout the US and Canada featuring more than thirty of the most talented drifters from all over the world. BlackVue provides dash cameras to each competition car, and some of the top competitors’ dashcams are connected to the Cloud to enable BlackVue app users to ride along their favorite drivers in real time during the events.
With the addition of Facebook Live streaming to the BlackVue app, the Formula Drift organizers were able to stream multiple simultaneous dashcam feeds—up to eight concurrently—to their Facebook Page.
In total, the over a dozen streams quickly totaled over 270,000 views and more than 5,000 reactions from the highly engaged viewers.

In spite of being a feature so far unheard of in the dashcam market, Facebook Live streaming via a BlackVue is fairly simple. In Orlando, it did not take much to make the magic happen. Using nothing more than the BlackVue mobile app, a single Formula Drift technician in charge of the competitors’ dashcams was able to manage all the streams. “I am impressed by how simple it is”, commented Luis Gomez “I thought it would be much more involved, but all I have to do is open the BlackVue app, select a camera, set a title and description for the stream, and hit the “Go Live” button”.
Bolstered by the success of the new feature, BlackVue is expected to bring more live streaming options to its apps in the near future.

ABOUT BLACKVUE™ :
Since established in 2007, BlackVue has become a reference of simplicity, reliability and connectivity, as well as elegant design. It introduced Full HD dashcams globally, followed by Wi-Fi connectivity for easy setup and management of videos through a mobile phone. It also became popular for its highly efficient Parking Mode monitoring function.
In 2015, BlackVue set itself further apart with the launch of Over the Cloud, a service enabling remote Live View of in-car footage from anywhere, anytime with the BlackVue app. This unique feature provides both business fleet managers and individual users with new ways to easily monitor their vehicles in real time, from the palm of their hand.