Home » Blog » Premium Dash Cams: What Makes Them Unique and Why Are They Worth It? 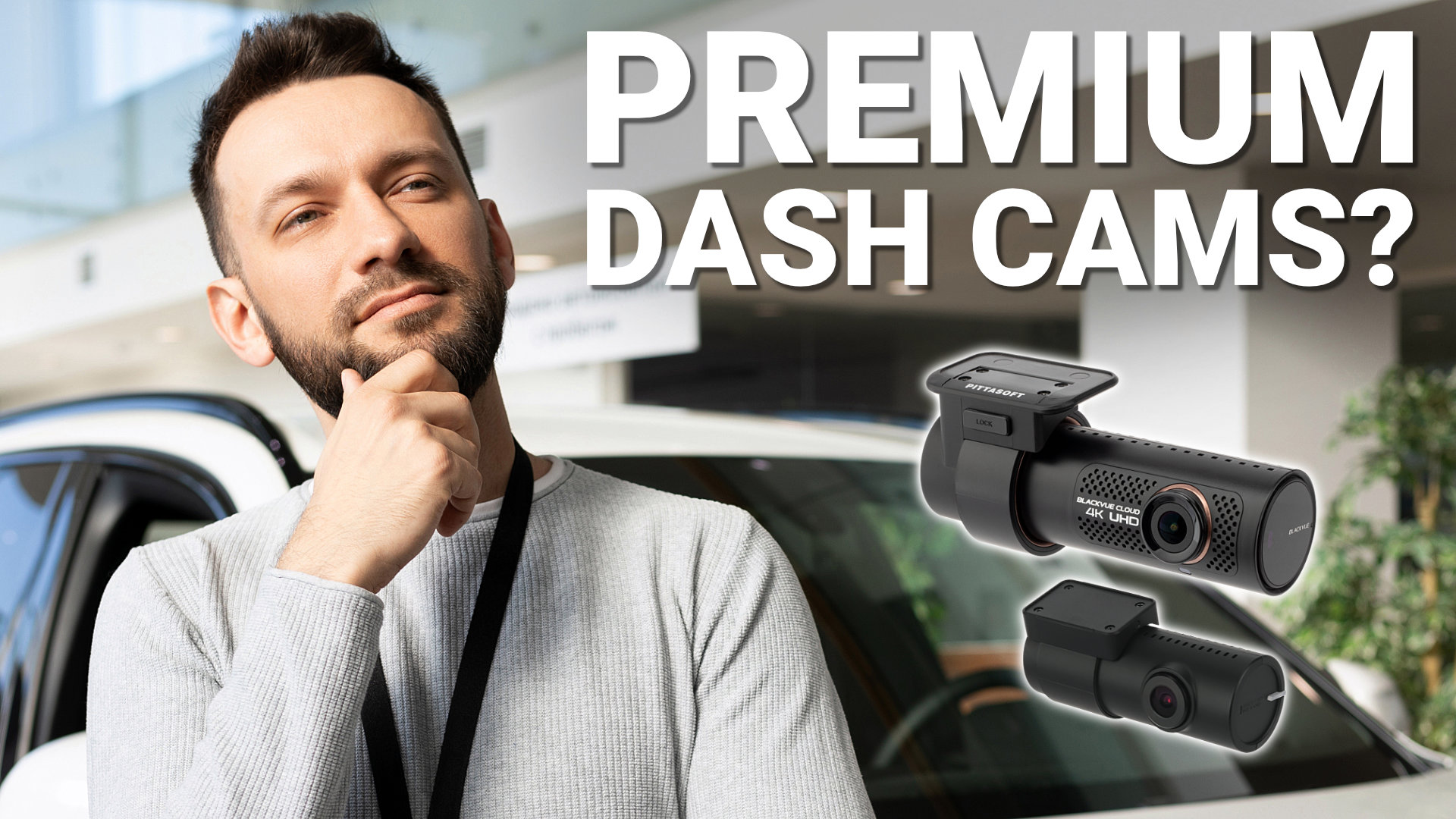 Premium Dash Cams: What Makes Them Unique and Why Are They Worth It?

One of the most common comments we get here at BlackVue is “why does this dash cam cost this much? I found one on Amazon for $30!”. Or perhaps you are thinking about using an action camera or an old phone instead of a dedicated dash cam? In this article, we will cover:

It goes without saying that selecting the best components for the job is a crucial part of building a quality dash cam. When it comes to image quality, this means choosing a sensor that will have high enough resolution but also good low-light sensitivity, all in a small form factor and without generating too much heat. The lens should have a wide-enough view angle to cover the action without introducing too much distortion or blur. Then the processor needs to be efficient and generate as little heat as possible as well. Oh, and of course, these components need to be somewhat affordable enough for a consumer-level product.
However, one of the common misconceptions about video quality is that if you are using a good lens, sensor and processor, you will mechanically end up with good image quality.

The truth is, out of the box, even the best CMOS sensors from the most reputable manufacturers can produce subpar results if they are not tuned properly. Even the cheapest cameras nowadays can capture decent footage in bright daylight. However, as the available light goes down or the action speeds up, blurriness will always become an issue.

That’s why image signal processor (ISP)  tuning is becoming more and more important to extract the best results out of any chip and sensor combination.
ISP tuning is the process by which engineers take the raw image output by the sensor and convert it into the final image produced by the camera. They do so by applying noise reduction, color correction and a multitude of other tweaks. For the best results, the engineers need to spend time not only coding but also testing in real-life situations, gather their findings and further improve their algorithms.

A good dash cam will generally be tuned to produce useful footage in a wide range of lighting situations, including at night. This is why a lot of premium dash cams often perform even better than premium action cameras in low-light situations. Check this in-depth video by YouTuber Vortex Radar for a better understanding of this topic.

Moreover, a good dash cam should be able to record reliably over hours in hot and cold temperatures.

While some cheaper models advertise lithium-ion batteries as a perk, we believe that even an entry-level dash cam should not compromise on safety. Lithium-ion batteries are perfect for their high energy density. Unfortunately, that comes at the expense of temperature resistance. Both cold and hot temperatures will do a number on lithium-ion batteries, with heat in particular potentially causing swelling or even fires.
That’s why all BlackVue dash cams have always come equipped with supercapacitors instead. Those components can hold a charge for a short period of time, for example to allow the dash cam to safely end a recording to avoid file errors when shutting down–accidentally or not. Most importantly, supercapacitors can withstand the harshest temperatures without risk of damage even after years of daily use.

Beyond the supercapacitor vs lithium-ion battery argument, dash cams are expected to run reliably in extreme temperatures. That means 24/7 continuous recording even while parked in the sun.
When recording at high frame rate or high resolutions, the components produce a lot of heat. If you factor in the ambient heat, you can understand that a dash cam needs to be well designed to achieve their basic function.
Now, if you consider that even the latest action cameras are subject to overheating-induced shutdowns, you can imagine the sort of engineering challenge a compact 4K–recording Cloud-capable dash cam might represent.
Taking it a step further, imagine designing a dash cam that can reliably do this over the course of multiple years.

Long-term reliability is hard to assess as it depends on multiple factors. Those factor include daily use time and external conditions such as temperature or humidity. Either way, general reliability matters a lot when it comes to choosing the right dash cam. A dependable dash cam means you can count on it to record reliably in any situation you might need it. Additionally, it means you can recoup your investment over time without worrying about technical failure. While it is difficult to predict the reliability of a specific model, choosing a dash cam from an established brand will stack the odds in your favor. BlackVue runs a weekly giveaway where users can send their BlackVue footage for a chance to win a new dash cam. A lot of the submissions include models that are five years old or more and still running strong.

Of course, to maximize reliability, it helps to understand what components might fail over time. Take for example the microSD cards that store the videos recorded by your dash cam. BlackVue dash cams use their own adaptive format-free technology to minimize risks of writing errors that would otherwise require to format the microSD card often. However, microSD cards are consumables that will eventually need to be replaced after a certain number of write cycles. Luckily, BlackVue dash cams continuously analyze the recording process to warn you with an audio message in case the microSD card is not recording properly.

Recording your drives is only half the job of a good dash cam. To offer 24/7 video protection, a dash cam needs to include the ability to monitor your vehicle while it is parked as well. In normal “driving” mode, dash cams typically record continually in a loop. Then, if you get into a crash or other incident, you can check and pull the footage right away. In Parking Mode, however, the dash cam should behave differently so as to save up on storage space and minimize power consumption. Generally, that entails having the ability to record footage based on movement and impact detection. Some models may include a Parking Mode timelapse mode as well, which continuously captures videos but at a lower frame rate so as to save storage space. That timelapse can be combined with buffered impact detection as well, such as in most BlackVue models, where the dashcam includes full audio and video recording of the few seconds leading to the impact.

As seen above with the ISP tuning, software programs can make a big difference in the dash cam user experience.

With dash cams, you have to consider firmware (the programs that run the dash cams) and viewer software (desktop and mobile apps to view and organize the dash cam videos). It is good to ensure that the company you purchase from maintains a suite of computer and mobile applications up to date. Similarly, a good dash cam company will tend to add features and improvement patches over time via firmware updates. Various companies have various ways to go about software updates. Some will use third party developers, some may not even develop programs beyond the firmware, and others might not even develop the firmware themselves.

At BlackVue, we maintain a single desktop viewer (declined in macOS and Windows versions) and a mobile app (for iOS and Android), as well as a universal web Cloud viewer that supports all major web browsers. Those applications support most BlackVue dash cams released in the past six years or so, and if needed, you can still download legacy applications that support older dash cam models.

As for firmware, most major BlackVue models receive several updates over their lifespan. That means updates even after newer models get released. Those updates can improve stability and performance or add completely new features. For example, BlackVue’s signature feature BlackVue Cloud was originally introduced via a firmware update back in 2015.

When your dash cam can provide monitoring of your vehicle while driving or parked, the next logical step towards ultimate peace of mind is Cloud connectivity.

While cheaper dash cams have flooded the market in recent years, few brands provide remote connectivity. As a pioneer in Cloud dash cams, BlackVue Cloud still stands out to this day as one of the most advanced dash cam connectivity features.

For a vehicle on the move, Cloud connectivity means the ability to track it and even communicate with the driver. This is a great feature for fleet tracking purposes or checking on a family member’s whereabouts. For individual drivers, though, Cloud connectivity is the “killer” feature when combined with Parking Mode. With the ability to get notifications in case of a hit to one’s parked car, as well as check remotely in real time what the dash cam is recording, BlackVue Cloud takes Parking Mode to the next level. With Live Event Upload, BlackVue Cloud takes security a step further by starting to upload video clips to the Cloud as soon as the impact is detected. That includes the few seconds leading up to the impact. That way, you can expect to have video proof safely stored in the Cloud even in the event of dash cam theft. With BlackVue Cloud, you protect not only your vehicle but also the dash cam itself.

Finally, it is worth considering things that are not intrinsically part of the product but matter almost as much. When investing in a premium dash cam, it is good to know that expert support comes included. What sets a premium dash cam apart from cheaper options is the support you can expect over the lifespan of your product, whether it is still under warranty or not. In the case of BlackVue, you can count on support from the brand on top of the support provided by its distributors and retailers worldwide. Whether you need advice choosing a product, installing it or setting up advanced features, you should always be able to count on a knowledgeable support agent to help you.

To sum up, there is more to a dash cam than meets the eye. Like for a lot of electronic devices, the value of a dash cam comes from more than the sum of its individual parts. It includes a combination of hardware, software, service and know-how acquired over time. And more importantly, a good dash cam will perform in conditions that may not be suitable for other types of cameras. While a spare phone or an action camera might help in a pinch, nothing replaces a proper dashboard camera to protect your vehicle 24/7.