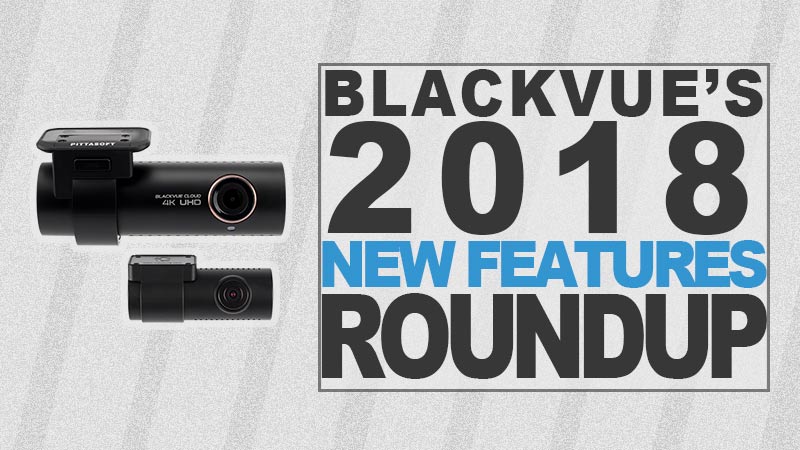 A Look Back at the BlackVue Dashcam Features Introduced in 2018

2018 was a busy year for BlackVue, that saw a constant flow of new features enhancing its dashcams. In this article, we are not talking about stability improvements or minor bug fixes but actual new functionalities added to existing dashcam models after launch. In case of the DR750S Series, if you got your dashcam upon release in August 2018 and did not update its firmware, you would have a lot to discover.

Let’s have a look back at those features.

Extreme Mode is the default quality setting for those models. Originally introduced with update 1.003 for DR750S Series, Extreme Mode bumped up the 60 frames-per-second front camera bitrate from 12Mbps to 25Mbps. It was the result of feedback from users who generally wanted the highest possible image quality for the high-frame-rate front camera. The rationale behind it is that best image quality when you really need it matters more than extra-long recording time. It also made sense to introduce higher bitrates since BlackVue can support microSD cards up to 128GB (and soon 256GB). While the difference between 12Mbps (Highest setting) and 25Mbps (Extreme setting) might not be obvious in low-detail or static scenes, the higher bitrate shines in highly detailed scenes and at high speed, as it prevents the formation of unsightly artifacts in the image.

Extreme is the default in all models that support it. In case you want to change it, with the BlackVue App or Viewer, go to Firmware settings > Basic > Video > Resolution.
If available, the highest resolution option usually locks the Image Quality setting to Extreme. If you change the resolution option, you can then change the Image Quality setting to Highest, High or Normal.

Sub-stream technology is probably the most underrated BlackVue feature. That’s probably because it is designed to make users’ life easier without getting in the way. Yet we believe it is a game-changer for review of videos over Wi-Fi or the Cloud.

Sub-streams are small-sized copies of the original videos recorded by your dashcam. While the original files are large and usually require some buffering to play even over direct Wi-Fi, sub-streams play instantly. Even over the Cloud, buffering is almost nonexistent.

For example, a 1-minute video at 25Mbps (Extreme) will be about 187MB in size. That’s a lot of data to load over Wi-Fi.
By comparison, the sub-stream version (called Quick Play file in the app and Viewer) is only about 4MB!

You can understand why it’s so much faster to load. Browsing videos is now effortless…and buffer-free.

When you find the video you need, hitting Download will download the original file in full resolution to your phone/computer for safe keeping.

Sub-streams are saved and don’t need to be activated. When viewing a video over Wi-Fi or the Cloud, you will be asked to choose to view the Quick Play file or Original resolution file. Simply choose Quick Play file. In can you tick the “Don’t show again” box, you can change this setting in the App settings menu of the BlackVue app. From the Main menu, swipe from left to right > App settings > Video streaming/playback quality.

One of the most requested features was the addition of a Time Lapse Parking Mode option. Time Lapse is great to cover long periods of time in small files. However, Time Lapse alone has two major downsides:

So we had to do better than “just” Time Lapse.

That’s why we decided to combine Time Lapse with buffered Event videos. With BlackVue’s Time Lapse, you get the best of two worlds. Your dashcam records at 1 frame per second as long as no impact is detected. This lets you record for 30 times longer than with regular videos (about 27 hours front and rear video on a 16GB microSD). If an impact is detected, a 1-minute Event video including the 5 seconds before the impact is created.

Alongside the release of the Buffered Time Lapse mode, BlackVue improved the existing Impact and Motion Detection mode. The goal was to reduce the number of motion-triggered false positives. Those happen when some far-away object triggers motion detection: trees moving in the wind, birds, animated signage, etc. It can result in useless videos sometimes filling the memory card.

To counter this, we added the possibility to toggle on a grid the regions of the screen that will trigger motion detection and those where motion will be ignored.

This mode is best used if your car is regularly parked in an area with low vehicle or foot traffic or if you have a high-capacity microSD card.

If you are not sure what Parking Mode option to use, we would recommend the Time Lapse mode.

Event Live Auto-upload is a Cloud feature that lets users save in real time a live stream from their front or rear camera. It can be set to trigger when an impact is detected while driving or in Parking Mode. You can also trigger Live Auto-upload with Manual Event recording (triggered by passing your hand near the proximity sensor on the side of the dashcam).

Although not the no.1 most-requested feature of the year, it is a feature that BlackVue users have regularly asked for. The rear camera already had this feature so it made sense to apply it to the front camera as well. If you have a right-hand drive vehicle and want to install your dashcam with the proximity sensor closer to you, you can activate 180-degree front camera video rotation. This will prevent front camera videos from playing upside down.

This feature makes BlackVue Cloud users’ life easier. Upgrading the dashcam’s firmware with a Wi-Fi dashcam usually can be done two ways: either by taking out the microSD card and copying the new firmware on it on computer, or via Wi-Fi. The Wi-Fi FOTA (Firmware Over The Air) option is handy as it allows to upgrade the firmware on the go, without taking out the microSD card. However, it requires you to first download the firmware to your phone over the Internet, then connect to your dashcam in Wi-Fi, then transfer the firmware to it. With Cloud FOTA, the BlackVue app informs you when a new firmware version is available, then lets you upgrade in one single click. And all this, remotely.

With your BlackVue connected to the Cloud, go to the BLACKVUE CLOUD menu in the app or Cloud Viewer in the desktop application. If a new firmware is available, a red dot icon will show near your dashcam’s name. Tap the 3-dot icon (⋮) > Remote firmware update > Update Now. The dashcam will start downloading the firmware and automatically apply it.
Note: your dashcam must be updated to

BlackVue Fleet Tracking, the dashcam-based all-in-one GPS tracking and video service by BlackVue, also got its share of updates.

Event File Auto-upload: an Event Auto-upload option specific to BlackVue Fleet Tracking, it work differently from Event Live Auto-upload. With Event File Auto-upload, the dashcam waits until the file is recorded, then uploads a sub-stream version of the file to the Cloud. There is no limit to the number of files that can be uploaded this way. Files are kept on the Cloud server for 7 days during which you can review or download them. You can also choose whether videos are uploaded every time right after being recorded or in bulk when your dashcam connects to a specific hotspot (usually a fixed Wi-Fi connection in range of your parked vehicle).

Driving Reports: with Driving Reports, you can view driving-related data such as distance driven, idle time, etc. generated by any dashcam in your account over the past 90 days. The feature is available on both the BlackVue Viewer and BlackVue App.

Have feature request? Feeling like your favorite model got left out?

Make your voice heard by joining our Community hosted in the BlackVue Help Center. Our Feature Suggestions section is there for you to post new suggestions and upvote features you too would like to see.