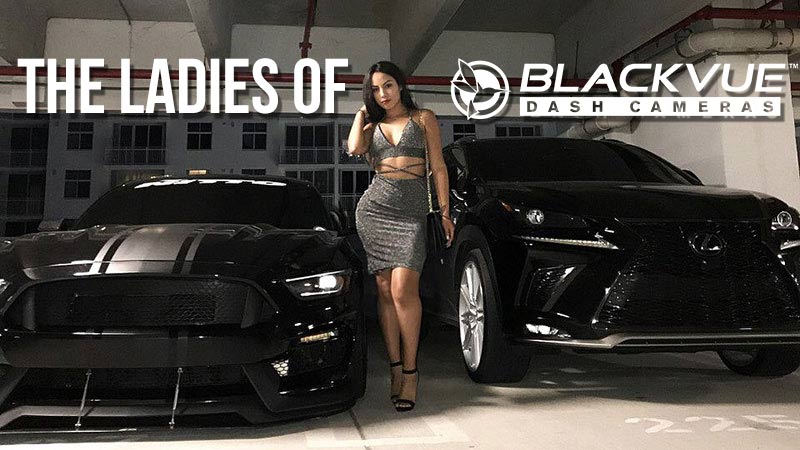 March 8th is a very special day in our calendars – every year that day we celebrate the International Women’s Day. Didn’t know it’s a thing? International Women’s Day has been celebrated for over a century now!
To show our appreciation, in this article we’d like to feature the ladies supporting BlackVue. Here are 5 of our female Ambassadors, proudly representing BlackVue online and offline.
BlackVue Ambassador Program was established almost 4 years ago and since then, we were represented by hundreds of amazing BlackVue brand Ambassadors. Although the car scene is generally dominated by men, there are some amazing ladies out there, who together with their stunning vehicles participate in the BlackVue Ambassador Program!
We reached out to our female Ambassadors and asked them about their passion for cars, how it’s like to be a woman in the industry and what the BlackVue sponsorship means to them. Here’s what they told us.
Presenting: the ladies of BlackVue. Meet Andrea, Elizabeth, Vanessa, Lizeth and Sana!

Being a woman, you have to work hard to prove yourself

Andrea is a proud owner of a Ford Mustang and a Lexus NX 300F (her daily driven car). Her passion for cars started when she was a little girl, at her uncle’s car shop. That’s where she learned all there is to cars.
Although it’s sometimes hard to be a woman in the male-dominated community, she says it only makes her push more.

“Until this day, I still get messages on social media asking if its “my boyfriend’s car” or people being shocked at the fact that the Mustang is a manual transmission. Yes, girls can shift gears too, boys!”, she told us.
Andrea has been with BlackVue for a long time now, starting with an older dual channel dashcam model and later upgrading to the BlackVue DR900S-2CH.

“I can always oversee my vehicle, all with a few taps on my phone thanks to the BlackVue Cloud feature!” Andrea told us. “Fortunately, I have not had any bad incidents with any of my cars, but I know if it were to ever happen, I’m always protected by my Blackvue!”
Visit Andrea’s Instagram profile: @andreeea_gee

Siblings and friends were the ones who sparked the interest in cars in Elizabeth (Ellie). Her very first car was a 1999 Acura Integra, and now she is a proud owner of a 2018 Subaru WRX!

“Being a female car enthusiast is definitely challenging at times, because lots of people just assume that my car isn’t mine or that I just bring my car to a shop to get all the parts installed,” she told BlackVue. “For me, the beauty in building your car is taking the time to learn and explore the in and outs of the car as much as you can.”
She is thankful for her relationship with BlackVue. She is currently running a BlackVue DR900S-2CH with a Parking Mode accessory in her Subaru.

“I absolutely love the quality and how easy it is to use. It’s definitely going to be a life saver one day!” she added.
You can see more of Ellie’s Subaru on her Instagram: @Ellie.wrx

Our next Ambassador, Lizeth, initially wanted to impress her dad—who worked on cars—by being as good as him at it! That’s how her passion for cars was born.

As a female in a male-dominated industry, she knows there are hardships she encounters. At the end of the day, she keeps a positive attitude about it, though. “It’s just something that we have to keep slowly overcoming”, she said. “I do believe at one point more women will feel more comfortable going out of their comfort zone in order to enjoy their hobbies. Gender, race, sexual orientation, etc.. mean nothing when it comes down to enjoying your passion for cars.”
Lizeth told us she is extremely grateful for the partnership with BlackVue.

“As a car enthusiast I’ve always stressed about where I park my car when going anywhere especially since a lot of the parts in my car are personalized… With BlackVue installed in my 2018 BRZ, I have the comfort of leaving my car anywhere without the worry of anything happening to it!”
You can take a look at Lizeth’s amazing build on her Instagram: @br.liz

Bring your own style to your car, kinda like make-up

Vanessa was first introduced to the car scene by her husband. At first she didn’t understand what’s the deal with “modding”, but then they started on her car and everything changed. She owns a 2016 Mustang GT.

“My passion for cars has a lot to do with the fact that you can do so much and bring your own style to your car, kinda like make-up”, Vanessa told us. “As you can see my Mustang isn’t built to everyone’s preference. I built it to my taste and I love the way it sits, but don’t be fooled. We’re not done yet!”

She said that as a woman, it’s sometimes harder because people don’t take her seriously or assume she doesn’t know much about cars.
“It can be tricky,” Vanessa told us. “People judge and assume you get special treatment for being a “girl”. In reality though, it doesn’t make much difference.”
Vanessa is sporting the BlackVue DR900S-2CH with a 64GB microSD card in her Mustang.
Vanessa’s Instagram profile is @nextlevel.s550!

Amazing people in the car community

Sana has been interested in cars since forever. As a child she put pictures of cars that she cut out of magazines on her bedroom walls. In 2015, she bought the car she dreamed of – an R35 GT-R and she spent the last four years modifying it. She enjoys taking it to the track to test it and push to its limits!

She told us that she had mostly a positive experience as a woman in the car community. People are usually respectful and want to talk about her stunning build – she was lucky to meet some amazing car enthusiasts.
Although she’s only been our Ambassador for a few months, she was happy to report that her experience was nothing but stellar so far.

“The cameras are great quality, the app is easy to use, and the picture quality is unbeatable!” she said.
Visit Sana’s Instagram profile and check out her build: @ladyzla_
***
Are you crazy about your car? Do you spend too much time on social media? Do you think you have what it takes to be BlackVue’s brand Ambassador? Go ahead and apply for our sponsorship today! Fill out the form for a chance to become the BlackVue Ambassador and enjoy many benefits of the sponsorship.
Keep up the great work, ladies!