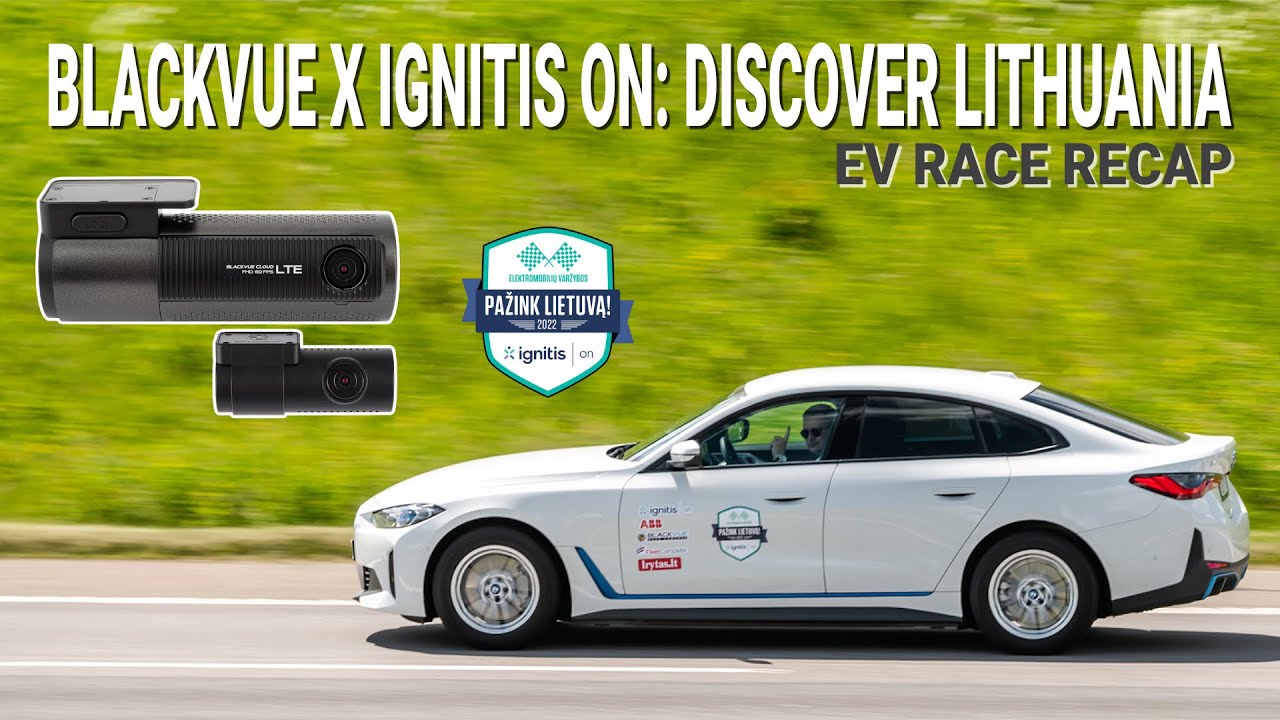 BlackVue LTE dash cams were used in the only EV rally competitions in the Baltics (Europe) this year, “Ignitis ON: Discover Lithuania!”. All 37 electric vehicles participating in the event were equipped with BlackVue DR750X-2CH LTE Plus dash cams. During the race, fans and electric vehicle enthusiasts could follow their favorite teams at all times thanks to the BlackVue dash cams broadcasting live.

Ignitis is an electric vehicle charging solution provider based in Vilnius, Lithuania. It provides charging solutions to individuals and businesses throughout the country as well as Poland, Latvia, Estonia and Finland through its subsidiaries.

Its Ignitis ON electric vehicle charging service is the largest fast-charging station network in Lithuania.

Since 2014, Ignitis has sponsored the only EV rally competition in the Baltics, which comprise Estonia, Latvia and Lithuania. Year 2022 welcomed the 8th edition of the rally. The main goal of the race is to drive the longest distance within six hours. Drivers must manage their vehicles efficiently so as to cover as much distance as possible without depleting their battery too fast, all while adhering to traffic laws and speed limits.

As global interest for electric vehicles increased, the event grew from a race between a few friends to a competition where the major brands in the EV industry are now represented.

Along with the rapid growth and soaring interest in the event, the organizers encountered unexpected problems…

About the BlackVue sponsorship

The organizers of the “Ignitis ON: Discover Lithuania!” race faced a recurring problem – complaints from the participants. The problem had gotten worse as the number of participants grew over the years and more categories were added. They claimed that the other competitors were breaking the rules. While the organizers could check if any of the participants were breaking the speed limit thanks to the GPS tracking solution they were using, it was difficult to check for anything else.

After the 2021 event, they decided to ask the participants directly for input on how to do better next time. One team suggested installing cameras in each competing car – but that posed more problems that needed to be considered. Regular cameras (or even action cameras) are difficult to maintain, constant recording or recording in a loop can be tricky, not to mention hundreds of hours of footage to comb through after the event.

Finally, the organizers reached out to BlackVue asking for support for the race. BlackVue provided Cloud-connected LTE dash cams that were then installed in every electric vehicle competing in the race.

“During the race anyone could connect to any of the cameras of the participants and see what they were doing without any restrictions,” Race organizer Darius Grinbergas said.

All 37 dash cams were connected to the Cloud and broadcasting live, which meant that the organizers could monitor them in real time. But that’s not all – anyone with the BlackVue app or BlackVue Web Viewer could find the competitors on the map and connect to their dash cams, watching them thanks to the Live View feature, which was made unlimited for all users over the event’s weekend.

All 37 cars were fitted with the BlackVue DR750X-2CH LTE Plus dash cameras. Even though not mandatory, some participants turned on the cameras facing the drivers, so technically there were even more cameras broadcasting live. However, even the 37 front-facing cameras were more than enough to beat the Lithuanian record of the largest number of cameras broadcasting live!

The participants competed in 4 categories – Europe, Tallinn, Warsaw and Nida. The vehicles were categorized based on the distance they could cover from Vilnius on a single charge. The winner in the Europe category was Ielektrinta zvaigzde (EQS from Mercedes-EQ). The team covered the distance of 569 km. Team Ignitis Supercharging (EQE 43 AMG) drove for 548 km in the span of 6 hours and won the Tallinn category. Porsche Lietuva – E-Performance Team with their Porsche Taycan 4S won the Warsaw category with 543 km. And lastly, Team Spark (VW ID.3 Pure Performance) took the first place in the Nida category with 448 km.