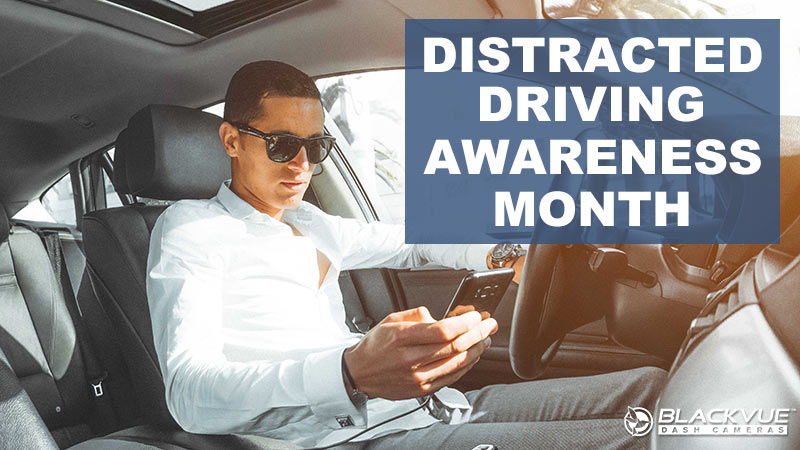 While the numbers are thankfully going down every year, thousands of people still die due to distracted driving. The list of distractions tempting every driver seems endless; from the infamous texting behind the wheel to less obvious distractions such as applying make-up or drinking coffee.

Distracted driving takes away these crucial seconds you need to avoid a close call or even a fatal crash. By driving while distracted you not only risk with your own safety, but the safety of others.

Over the years we received many testimonials from BlackVue users, who witnessed or were directly involved in accidents caused by distracted drivers. Here are a few of the videos recorded by their BlackVue dashcams they shared with us.

This video, sent to us by the BlackVue user Hien, is a classic example of distracted driving. Hien’s car was rear-ended by the vehicle behind him. The other driver was clearly distracted either by his phone or another device. Thankfully, no one was hurt and insurance covered the cost of the small dent caused by the collision.

A distracted driver (Eric, who sent us this video, suspected he was busy with his phone…) crashed into Eric’s 2019 Toyota Camry. They were both waiting at an intersection’s red light, and although the right-turn lane cars were already moving, the light still hadn’t changed for Eric and the truck driver.

Eric’s Toyota’s lower & upper bumpers had to be replaced. Everything was recorded by the BlackVue DR900S-2CH and in case of a dispute, Eric had clear evidence at the tip of his fingers!

And here’s another perfect example of the reason why you shouldn’t use your phone and drive. BlackVue user Ernesto was waiting to turn right at an intersection. A car in front of him turned already and Ernesto moved too, next in line. Unfortunately, the driver behind (who was later discovered to be on his phone when it happened) thought he already turned and ran straight into him. The relatively small tap on Ernesto’s car was estimated to cost $2000!

What’s worse, the other driver tried to convince the police that arrived at the scene that the damage was already there… and at one point, he ended up in handcuffs! Thankfully, the entire incident was recorded by Ernesto’s BlackVue DR750S-2CH dashcam (rear camera).

BlackVue user Miles was rear-ended barely 2-days after he installed the BlackVue DR900S-2CH in his truck!

The other driver claimed Miles stopped suddenly and she had a… coughing attack.

Thankfully, Miles was able to pull up the video from his dashcam quickly – and it showed that the lady in the other car had the visor down and she wasn’t paying attention to the road. She admitted guilt in the end.

The last video also shows the importance of paying attention to the road – any distraction can lead to an easily avoidable accident!

BlackVue user Linda was heading home from holiday. She was stopped at the red light, and when the lights turned green, the car in front of her was slow to start.

The driver of the car behind Linda either didn’t pay attention to that or only looked at the lights turning green – because they decided to go even though Linda hadn’t moved yet! As a result, they crashed straight into Linda’s vehicle. However, Linda was calm – she had the incident recorded by her BlackVue DR590W-2CH dashcam (Wi-fi enabled dashcam model).

Technology to the rescue

So how to prevent distracted driving? Let the technology help you. Go hands-free by getting a smartphone holder and a Bluetooth set. A hassle-free dashcam such as BlackVue – which you can install and essentially forget about unless something happens on the road – will let you record everything in front and rear of your car without unnecessary fiddling with the setting every time you start your car.