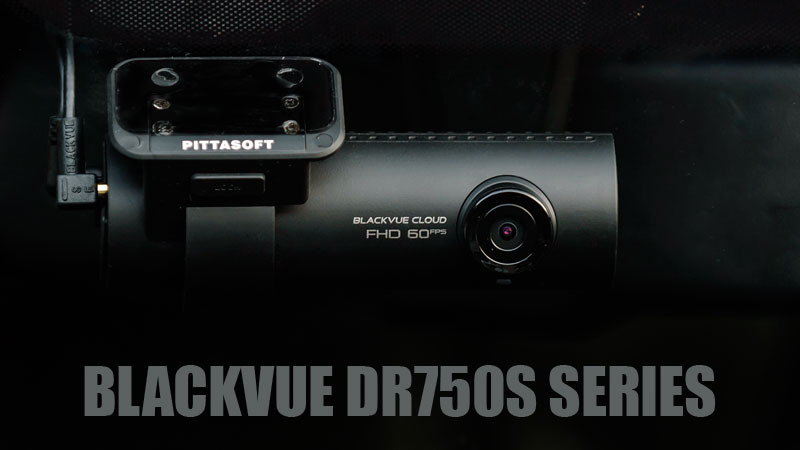 The dual-channel DR750S-2CH and single-channel DR750S-1CH refine the design of their predecessor, the DR650S Series. Although similar in appearance, the DR750S Series represents a jump in performance. Every function of the DR650S Series has been improved upon. This goes for image quality first. With Full HD 1080p Sony STARVIS sensors in each camera—including front and rear for the DR750S-2CH—the DR750S Series records detailed videos under any light, bright or dim. Even in its default settings, the night recording clarity is the best of any BlackVue dashcam to date. For users who want to push the ISO sensitivity even further, BlackVue added Enhanced Night Vision, which maximizes brightness in dark environments while preserving highlights and keeping noise down in daylight.
Another notable feature of the DR750S Series is its 60 frames per second recording option for the main camera. The doubled frame rate adds fluidity to videos and enables the clear capture of fast-moving objects thanks to much-reduced motion blur. While single-channel dashcams with 60 frames per second are beginning to enter the market, the DR750S-2CH is the first dedicated dashcam featuring simultaneously front 60 frames and rear 30 frames recording.
This speaks volumes about its processing power, which users will appreciate as they interact with their dashcam. The DR750S Series does everything faster. Be it booting up, downloading files via Wi-Fi or acquiring a GPS signal, the DR750S Series is about twice as fast as the DR650S Series.

However, raw power is not the only thing that got overhauled with the DR750S Series. Ease of use and reliability have been the objects of a stronger focus. Thanks to its active community of users, BlackVue gathered a lot of feedback over the years and recently, this trend only intensified. BlackVue would like to thank its users for their invaluable input, which helped in no small part shape the DR750S Series. The new features include BlackVue’s Adaptive Format-Free file management system which reduces file errors and need for microSD card formatting. Event File Overwrite Protection is also a welcome new function that should give users peace of mind by preventing deletion of critical videos generated by impacts or sudden change of speed. Then there are a number of less obvious but still significant improvements, such as low power consumption and the high heat endurance of the dashcam, which operates easily at 10 degrees Celsius (50°F) higher than its predecessor. The extra processing power also means better algorithms can be used to encode videos more efficiently while improving the image quality over the previous generation.

“As BlackVue introduced unique features like BlackVue Cloud, we also made it a priority to gather user feedback and share it with our product development teams more efficiently”, said Jeremie Sinic, Manager of Marketing and Customer Support for BlackVue. “To me, the DR750S Series is the embodiment of this approach, and I am sure our new and long-time customers are going to love all the changes, big and small.”

The DR750S-2CH and DR750S-1CH are now available to purchase on www.blackvue.com.

ABOUT BLACKVUE™ :
Since established in 2007, BlackVue has become a reference of simplicity, reliability and connectivity, as well as elegant design. It introduced Full HD dashcams globally, followed by Wi-Fi connectivity for easy setup and management of videos through a mobile phone. It also became popular for its highly efficient Parking Mode monitoring function.

In 2015, BlackVue set itself further apart with the launch of Over the Cloud, a service enabling remote Live View of in-car footage from anywhere, anytime with the BlackVue app. This unique feature provides both business fleet managers and individual users with new ways to easily monitor their vehicles in real time, from the palm of their hand.

STARVIS is a trademark of Sony Corporation.