Home » Blog » An Extra Set of Eyes On The Road: How Dashcams Can Improve Fleet Driver Safety 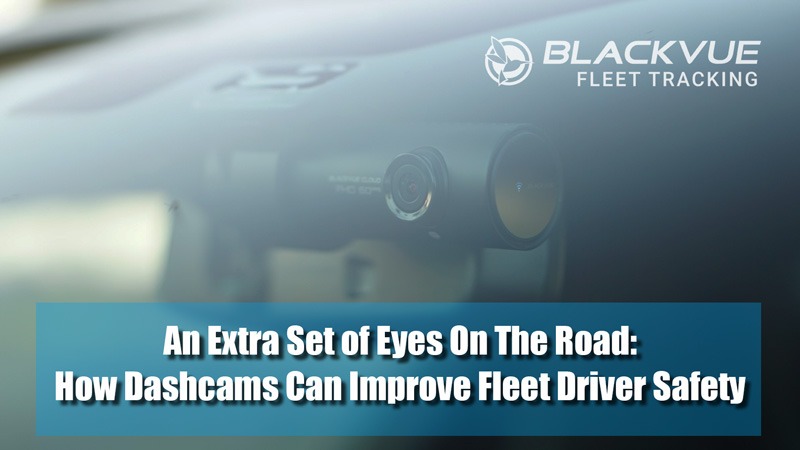 An Extra Set of Eyes On The Road: How Dashcams Can Improve Fleet Driver Safety

Not so long ago, the concept of a dashcam felt futuristic and overzealous to some people, but that perception has changed materially in recent years. Dashcam purchases shot up 20% between 2017 and 2018, and that trend has only continued to grow since then.

It’s not hard to see why dashcams have become so popular: they hold everyone accountable. From law enforcement officers to professional truck drivers and average commuters, more and more folks are outfitting their vehicles with dashboard cameras.

Can installing dashcams in your fleet improve your drivers’ safety, though? To put it briefly: yes. There are a few ways that adding quality dashcams like the ones we offer at BlackVue to your fleet will heighten driver safety, and the addition will provide a few other benefits as well.

Drivers Are More Conscientious When Monitored

Around 50% of drivers surveyed in a 2018 poll believe that dashcams make roads safer, and for good reason. It doesn’t take much reasoning to deduce that drivers are simply more diligent when they know that their every move is being recorded.

This simply boils down to basic human nature—when someone knows they are being watched, they do everything by the book; it’s a scientifically proven fact. When drivers know that their dashcams are on, they’ll make driver safety a top priority, especially when they are aware that their jobs depend upon maintaining that high level of safety.

Of course, to maximize the effect of this benefit, a dash cam-based fleet tracking solution is the most constructive solution. It’s one thing for drivers to know that their dashcam footage might be reviewed later on; it’s quite another for them to know that their current performance could be monitored in real-time.

Pedagogy is key here, and that includes demonstrating tangible benefits to your drivers. Accountability also means better protection for them. The idea here is not to give drivers the impression that they are under the thumb, but rather to let them know that they will be both comprehensively supported and held accountable as a member of your team. After all, having footage to back them up will certainly come in handy should any sort of questionable situation arise.

To be clear, the level of surveillance you’re allowed may be limited depending on where you’re located due to privacy laws—be especially mindful that what you are recording complies with local stipulations. Most importantly, if you decide to equip your fleet with dashcams, be transparent about it with your drivers.

Insurance companies encourage average consumers to invest in dashcams. A cynic could argue insurers are banking on drivers incriminating themselves in the footage more often than not. That way, the insurance claims would then be able to go unpaid. That said, there is no denying that dashcams do help expediting claims.

Given that your drivers are professionals, you are probably already fairly confident in their abilities. Couple that natural ability with their heightened diligence thanks to your added dash cams and fleet monitoring cloud service, these cameras will further benefit your business when it comes to insurance dealings.

Should an accident or traffic violation occur, the dashcam will verify whether or not your driver was at fault. Even better, because your drivers will now be working in a hyper-vigilant state, there’s a good chance that your fleet will see a decline in insurance claims altogether.

As every fleet manager knows, a sharp enough drop in claims could spell a complimentary drop in insurance rates. While this is anything but assured, it’s certainly not out of the question.

In any case, you cannot control the behavior of other drivers no matter how closely you monitor your own, and you will want to have footage of accidents to backup your fleet if the situation arises.

Performance Reviews Are Easier Than Ever

Regardless of your primary goals when initially installing a fleet monitoring system, you’ll find that dashcams provide you with a powerful motivational tool as well.

One highly effective way that some fleet managers incentivize driver safety is with bonuses awarded for exceptional performance reviews. Dashcams allow you to view a live stream, track a driver’s location, generate driving reports, and gain other valuable data. In turn, you can synthesize that data into comprehensive performance review that goes deeper than usual KPIs.

In these cases, drivers know that the fleet is equipped with dashcams, but they don’t necessarily know when performance reviews are being conducted. This encourages them to uphold high safety standards every single day. Meanwhile, it offers them something to look forward to in return for upholding those standards.

Conventional wisdom states that hindsight is 20/20; in truth, the human mind has a way of altering the truth of the past. Fortunately, when you install dashcams in your fleet, you give your drivers the opportunity to review any mishaps on the road without the haze of hindsight clouding their memory.

With the help of the dashcams installed in your fleet, you give your drivers the opportunity to learn and grow. Drivers who have been involved in an accident will have a chance to rewatch the entire event play out. Some situations on the road happen so quickly that the driver may not have any idea what went wrong—rewatching the footage can change that.

Having drivers sit down and watch the dashcam recordings of incidents will not be meant to embarrass or upset them. Rather, it will be used as a growth opportunity. By understanding what went wrong, drivers can ensure they will react more appropriately should they face the same situation again.

Create the conditions for optimal safety

For fleet managers, improving driver safety always ranks as a chief priority. It’s no surprise, then, that dash cams are becoming more popular by the day. No magic button ensures every driver will do everything right 100% of the time. However, a robust fleet monitoring system goes a long way toward heightening driver awareness and insulating your fleet against insurance difficulties.

Find the right dashcam system for your fleet with BlackVue today so you can enjoy the peace of mind that follows, knowing your drivers are better protected from the occupational hazards they may encounter.