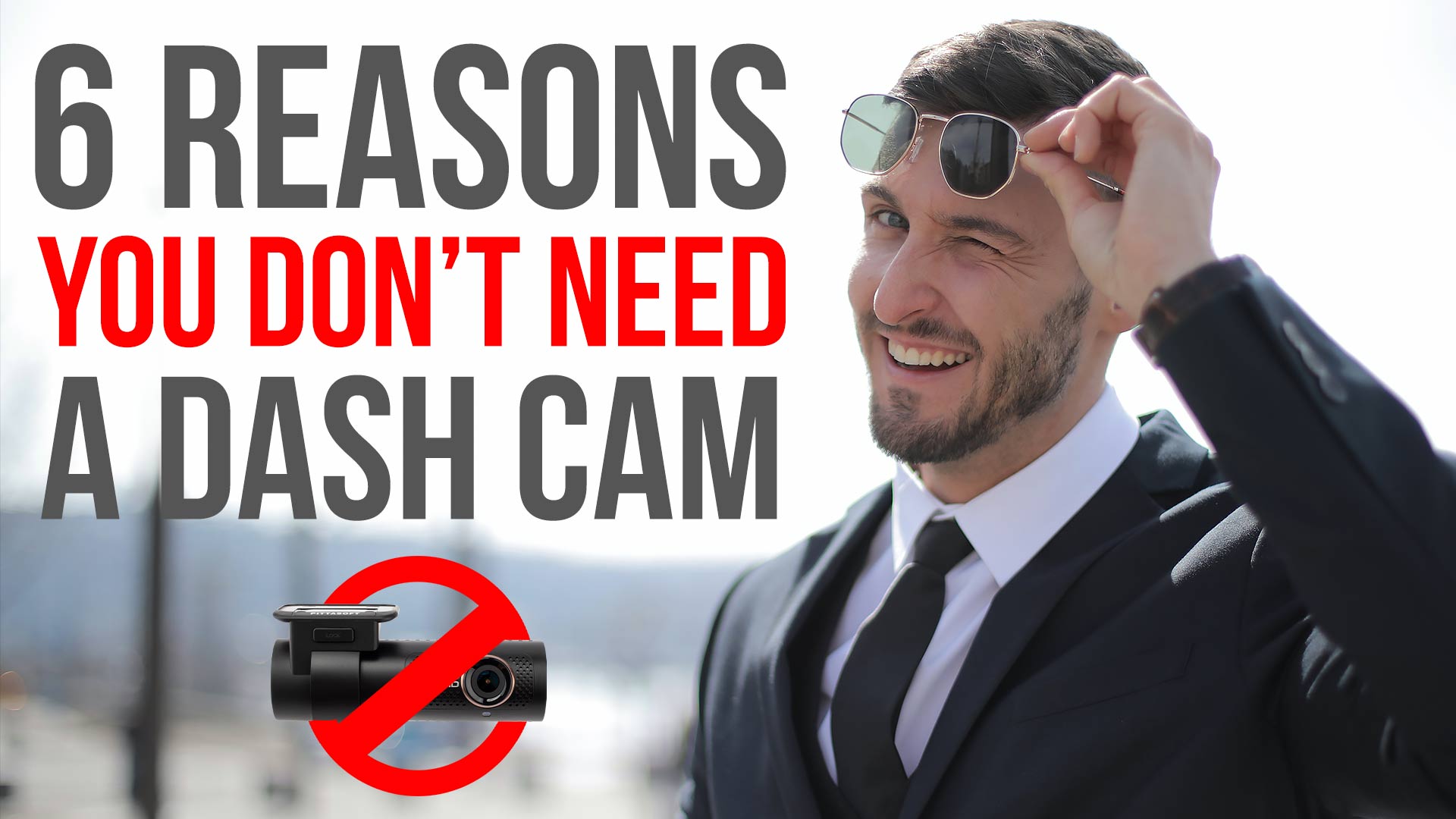 Although having a quality dash cam in your car is generally a worthy investment, we reckon that a dash cam is not for everyone. In some cases, it might be advisable to even stay away from a dash cam for your own good. In this article, we go over the top six reasons why you do not need a dash cam.

Let’s get this one out of the way: dashboard cameras, or dash cams for short, are meant to be installed in a car. If you don’t have a car, a truck or any four-plus-wheeled vehicle, chances are you do not need a car dash cam. It’s just science.

It’s difficult to justify buying one when you don’t even have a vehicle you could install your dashcam in. What’s the point, right? Getting one preemptively, in case you unexpectedly become the owner of a car? Still quite a stretch. You would probably just end up tossing the box in a corner to gather dust. Of course you could put it somewhere on display instead – the BlackVue boxes are pretty neat, judging by all the unboxing videos on YouTube!

2. You commute by bus

So you do have a car, but you’d rather commute by bus or other public transportation means. You only use your car for very special occasions, otherwise it’s just gathering dust in your garage.

You cannot actually remember when was the last time you used your car. You are even considering selling it and getting a fancy bicycle instead. That would be a very environmentally conscious choice and we commend you for it.

3. You drive it like you stole it (and have a reputation to uphold)

There is no need for a dashcam–recording not only how others drive but you, too–if you drive your car like you stole it. Statistics show dash cam owners tend to be safer drivers, so what good would a dash cam be to you?

You collect speeding tickets like trophies, but more importantly, you take the greatest pride and pleasure in watching your insurance premium grow bigger year after year. If that’s you, one word of advice: don’t get a dash cam. You probably think dash cams are for losers, anyway, but if you do get one, make sure it is not powered. Imagine the blow to your bad boy (or bad girl) reputation if video evidence showed that a collision was the other driver’s fault! Shame!

4. You are waayyy too chill

Whenever you get rear-ended, you don’t swear and get angry at the other driver. Instead, you feel sorry for the crushing guilt the other driver must be experiencing. When you get in a crash and the other driver is at fault, you’d rather diffuse the situation through dialogue. And rather than standing your ground, knowing perfectly well that you are in the right, you prefer to appease the other party at any cost and would never call the police under any circumstances. There is too much ill will in this world and you feel an urge to bless the world with your unconditional trust. When the time comes to part ways, you handshake it, trusting that they’ll eventually turn around and tell their insurance company the truth. And if they don’t, even better, that will mean you’ve helped a poor soul in need and it makes you feel good. Providing indisputable video evidence to your insurance or the police would make the guilty party’s story fall apart like a house of cards and you clearly don’t want that. Do you?

Scammers spend their days putting together the most far-fetched, harebrained schemes to extract money out of unsuspecting law-abiding drivers. They patiently wait for the perfect mark to show up–usually with a nice car that screams “money” or a mom with kids in the backseat, less likely to make a scene–so they can slam the brakes in an obvious crash for cash attempt or throw themselves in front of the vehicle and fake an injury…with varying degrees of success and credibility.

That’s dedication and hard work that we are sure you can appreciate! So we get it, you don’t want to be the jerk who ruins their act. With a dash cam, you’d have to watch the scammer slowly die inside as they realize how ridiculous they looked trying to pull off their stunt. Obviously, nobody wants that!

6. You’ve got security watching over your car 24/7

Your car matters a lot to you and you always feel anxious about what could happen when you are not looking. That’s why you did what anyone in your situation would do: you hired security to watch over your car day and night. It sure ain’t cheap but oh so worth it. Of course, there is the minor inconvenience of making sure they are following you when you drive away, and the extra parking space required for their vehicle. And then there’s the embarrassment of explaining to your mechanics that yes, the two men in black will be staying and watching over him while he proceeds to that oil change. Finally, after you have gone to those lengths to protect your car, learning that you could get the same peace of mind running a BlackVue dash cam with Cloud and Parking Mode would probably be too brutal a realization. That’s why if that’s your case, we do not recommend getting a dash cam either.

Now, if somehow none of the above applies to you, chances are that you need a dash cam. Still on the fence? Then check these 5 examples when a dashcam saved the driver thousands of dollars!

If you are wondering what on earth you just read, remember this was originally posted on an April 1 (wink wink).